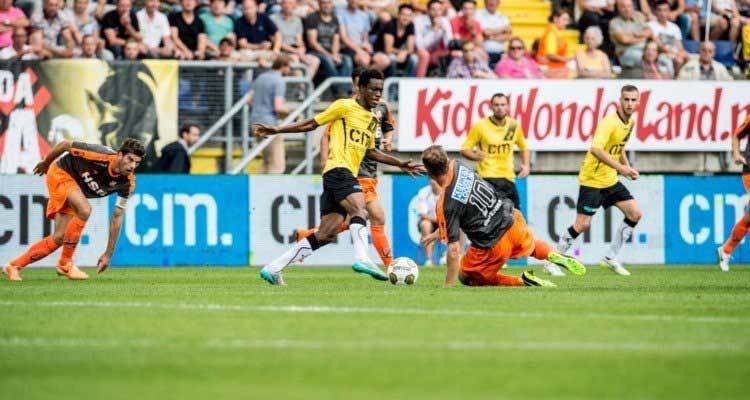 CM Payments' name has adorned the front of the NAC shirts since 2015/2016. This is currently the second season as main sponsor for CM Payments, and both parties have already extended the cooperation at an early stage for the upcoming season. This means that CM Payments' logo will again feature on the players' shirts and on the boards around the pitch in 2017/2018.

So far, both parties look back with satisfaction on a productive period for CM Payments as main sponsor. The visibility and recognisability of CM Payments has significantly increased, but the company was also very present at the 'Parel van het Zuiden' with some fun and inspiring activations. The company was also involved in actions around the 3D puppets, the NAC Light App, The Forgotten Child, the club anthem, sung by employees of CM, and, more recently, the main sponsorship's auction for one day for Serious Request. The latter generated a whopping €17,000.- for charity.

NAC also cooperates intensively with CM on various other levels, for example in the sale of tickets for pre-season matches, and collecting the money for season tickets. In addition, both parties have plans to optimise more of NAC's processes with the CM's services and expertise.

'A lot of confidence'

CEO of CM Jeroen van Glabbeek: “We have a lot of confidence in NAC, both in the team and in the management and the supporters. Since we became main sponsor, our name recognition has considerably increased. Furthermore, NAC is important for Breda. CM feels connected to both NAC and Breda. NAC also serves as a partner in the field of payments. We want to expand this in the coming year, also towards other technologies CM is working on.”

Managing Director of NAC, Justin Goetzee: "CM has been a great main sponsor for us in the past 18 months. The company's commitment towards our organisation, supporters and sponsors is nice to see. I personally have never cooperated with a main sponsor that is as active and loyal as CM. In this way, two of Breda's well-known icons, NAC and CM, can enhance each other for a third season. The fact that our main sponsor has decided to extend the contract this early expresses a lot of confidence for the coming year.”