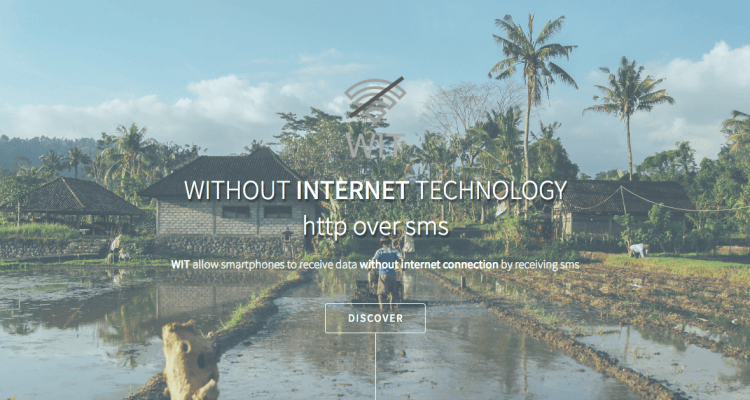 Each year, The Next Web plays host to an epic Hack Battle during The Next Web Conference in Amsterdam. In a mere 36 hours, 140 code lovers, designers, and digital creatives dissected, connected, and created their wildest dreams.

Alessio from WIT: “Smart cities, smart houses, Internet of Things, smartphones, all these things are a great technology and they are changing the way we’re living. There’s one small barrier: we need internet all the time. No internet means no google, no Wikipedia, no Facebook and no knowledge and information. Most of the people in the world don’t have access to that information. Which is a pity.”

WIT presents at the Hack Battle http over SMS. Their SDK recognises whether tech has internet access or not in their app. It there is internet, it just calls the API and get the data. If not, the WIT SDK will send a request and sends an sms to the servers and return the data to the user through SMS. Users can even order an Uber ride through WIT.

In short, WIT allows any mobile phone to receive data without internet connection by receiving sms. WIT recognises if you have or not internet access and if you do not, it makes you receive the data you need via sms.

Used by 85% of the population

Alessio: “This application can be used by 85% of the people worldwide, using just SMS over a 2G network. “Connecting the world is one of the greatest challenges of our generation. Let’s make this a reality”, closes Alessio his presentation, quoting Mark Zuckerberg.”