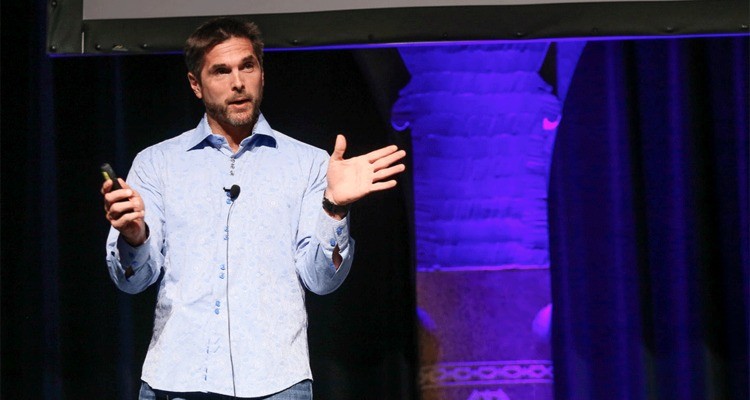 Mark Fidelman is CEO of Evolve! Evolve! is a social so-called social enterprise that recognizes social technologies and allows people to be who they are. “More and more people want to connect with a person within an organisation in a more human way”, Fidelman explains. “If you establish trust with someone from within an organization, you’re more likely to buy something. It starts with trust.”

Next to trust comes quality and frictionless. A company that benefits from frictionless payments is Starbucks. “At Starbucks, you don’t even have to pay, it seems. You can order in advance. Once you’re there, it knows you’re there. You just have to open up the app and order what you want. It’s just one button. That’s pretty frictionless. They have 22% increase in sales.”

At Mobile Convention Amsterdam 2015, Mark Fidelman climbed the stage to talk about the 10 best Mobile Marketing campaigns that went viral and made millions.

Fidelman is especially impressed by the results that came out of Ogilvy’s campaign. “My favorite of the group I’ll be discussing is the Scrabble Wi-Fi mobile campaign. Where Ogilvy Paris decided to create free Wi-Fi connections in places where you typically can’t find Wi-Fi connections. But, cleverly, in order to join the free Wi Fi network, you had to unscramble a word, just like the game. The higher the word score, the longer you could use the network. Results: 110,000 minutes of free WIFI, 6000 words countless downloads of their Scrabble App.”

According to Fidelman for campaigns to go viral they should meet several demands. “As for the Ogilvy campaign: it tied in an educational angle, with a public need to get on Wi-Fi and gave them exposure and downloads to their app. In general, marketers should aspire to meet and exceed the goals they have for their mobile campaign. They can’t all go viral, but they should be well thought out to achieve their objectives.”

At the stage of Mobile Convention Amsterdam, Fidelman explains where mobile marketing is going. “One future of mobile marketing lies in context, location and commerce. Marketers should be preparing for a time when the mobile device can be used to nudge consumers to consider their products in the context the consumer is in, like a store.