Based on number of Thuiswinkel.org it appears that around 96% of the Dutch aged 15 and older make one or more online purchases each year. Over 2019, the number of online purchases grew by another 4% to 258 million annually, representing a combined spend of €25.8 billion, an increase of 7% compared to 2018.

The number of online purchases further increased in 2020, in part due to Covid-19. People are staying home more out of necessity and are spending their money on products instead of services, and in doing so they have discovered the ease of online payments. According to the Thuiswinkel Markt Monitor (Dutch source), it also appears that the number of online purchases grew by 36% annually over the second quarter of 2020 and that there were 800,000 more e-shoppers over the same period (from 11.7 million to 12.5 million).

In the second quarter alone, there were 85 million purchases, with the expectation that this will increase even further as a result of the strict coronavirus measures and the approaching holiday season. In the third quarter, web shops such as Zalando saw an annual revenue increase of 21.6%. Companies that do not yet have a web shop will be feeling the pinch, as recently discovered by the retail chain Primark.

Another outcome of the coronavirus is that we carry less and less cash in our pockets and are instead opting for contactless payments with, for example, our payment card, mobile phone or wearable. According to Mastercard, the number of contactless payments rose to 78%, of which 14% were conducted via smartphone or wearable. The expectation is that this trend is here to stay and that we will not go back to paying in cash. People do in fact find that contactless payments are more practical and more hygienic. In the same study by Mastercard, 42% of the Dutch indicate that they no longer use cash, which means that they make fewer cash payments than in other European countries. Almost one in five Europeans (17%) say they no longer use cash.

2. An increase in mobile payments 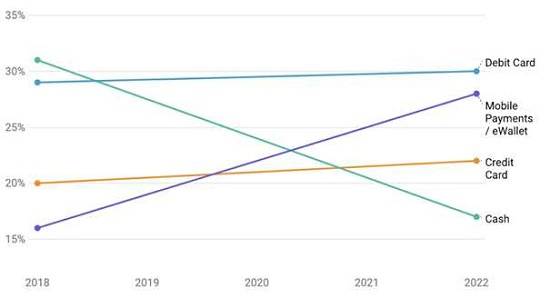 It has also come to light in Emarketer’s Global Mobile Payment Users report, that 81.8% of the population in China use mobile payments, putting the country way ahead of the pack. This position is partly thanks to Alipay and WeChat, who both have more than 1.5 billion active users. In Europe, we see that mobile payments are more commonplace in countries like Denmark and the United Kingdom than even in the Netherlands.

The Dutch are lagging behind partly due to how we have been doing their payments for many years, but they are catching up. With the integration of iDeal into mobile banking apps, many consumers have discovered the convenience of mobile payments. 90% of iDeal payments are already being conducted via smartphone. The arrival of Apple Pay in 2019 has also helped drive the increase in the use of mobile payments in the Netherlands.

We believe that the number of mobile payments will further increase over the coming years, due to, among other things, the introduction of other mobile wallets such as Google Pay and Click to Pay. These services make online purchasing more accessible to people.

3. The rise of QR payments

We also see that more and more people are making QR payments with their mobile phones. This development is being driven by, among other things, the fact that companies place a QR code on their invoices and receipts, which enables people to pay the amount immediately. One of the benefits offered by this payment method is that customers cannot make errors in the payment details.

QR payments are also perfect for donations and charity collections. In this way, you don't need to keep any cash around the house, and you can simply donate the desired amount instantly by using the QR code on the collection box or the donation card. Collectors also don’t have to carry around separate equipment and can still accept contactless payments. During their recent collection week, KWF (Dutch Cancer Society) saw a massive increase in QR payments, with people on average donating larger sums.

4. Tokenization is the future

As the way we consume continues to change, we are noticing a shift in payments. Payments are becoming more seamless and faster, but safety remains the top priority. One of the solutions is tokenization. This technology replaces a physical payment card’s number with an alternative code, a so-called token.

This means that credit and debit cards are digitized and can be included in a mobile wallet, such as Apple Pay, but also in wearables and other smart devices, to conduct both physical and online payments. Due to tokenization, it will, for example, be possible to pay online with your debit card (Maestro). You can also link a token to a company from which you repeatedly purchase products or services, such as Netflix or Uber. As a result of tokenization, we therefore also expect the number of online transactions with debit and credit cards to increase.

The main benefit of tokenization is that the risk of fraud is lower. No card details are shared with which one could commit fraud. If, for example, your wearable is stolen, the token is immediately blocked and replaced. The moment that the token expires it gets updated automatically. From 2021, online payments will become even more secure thanks to two-stage verification, where verification can be performed quickly by means of facial or speech recognition. This will mean that PIN codes and passwords will no longer be necessary.

Another important development is conversational commerce. As the number of people communicating through mobile apps continues to increase, more and more mobile commerce is taking place. By 2021, mobile ecommerce sales are expected to account for 54% of total ecommerce sales. Conversational commerce responds to this by allowing the full dialogue between businesses and consumers to take place through popular messaging channels such as WhatsApp. Consumers can use these messaging apps not only to chat with a company but also to make a purchase and pay instantly. Receiving immediate answers to their questions means customers are less likely to cancel their purchase.

Thanks to mobile solutions, contactless ordering and payments on location are also on the rise. For example during an event it is possible to place your order via an online order page or app and pay immediately. This minimizes the contact moments between visitors and staff and makes the order process much smoother.

All these developments will not only make paying faster and easier, but also safer in both the digital and physical world. Even when the coronavirus pandemic is a thing of the past.

Get the Guide
Was this article interesting?
Share it!

Get the Guide
Tags
Payments

Suzanne Caron
Within CM.com responsible for PR and communications. Looking for something newsworthy about CM.com? Check her content!