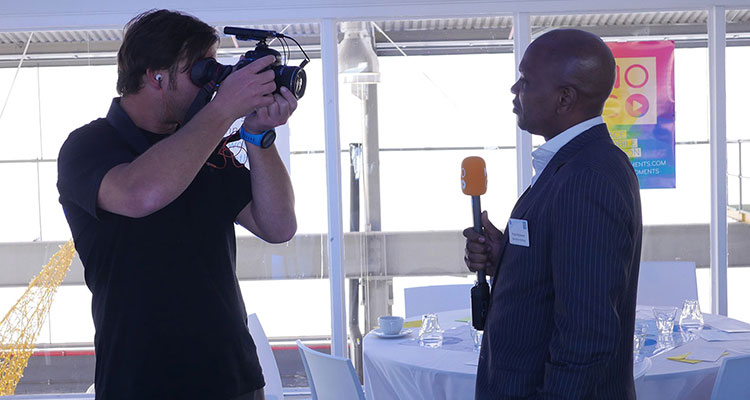 Our smartphone use will diminish. In ten years' time, the handset itself will become almost irrelevant and no longer the device you first check every morning. Our smartphone savviness will evolve into a more efficient use of displays.

It's 06:30 hours. Your watch wakes you by projecting the time on the bedroom wall and asks if you'd like milk with your coffee. You lift your thumb to approve after which the coffee maker starts working. You put on your pair of glasses, walk to the shower and ask your glasses to project missed messages from friends, relatives and colleagues. Your finger movements in the air make the projector screen skip through the messages as you answer them one by one.

Futuristic, but according to Arthur Goldstuck we will be using displays more efficiently than we are now. Within ten years, our handsets become almost irrelevant as we keep finding new ways to put more efficiency and functionality into displays. Arthur Goldstuck heads the World Wide Worx research organisation, leading ground-breaking market research into how change is affecting business and society, and presents his findings and insights to audiences across the globe. Goldstuck is an award-winning writer, analyst and technology commentator and speaker at the tech-focussed event MOCO Moments in Cape Town on November 14th.

"Our handsets will still be there", he explains his vision of the mobile future. "They'll still be there in the sense that it won't be what you do, but what makes it possible. It's the display with which we will interact, rather than directly with the hardware. For example, Sony has developed the Xperia Projector for interactive displays and Motorola its Moto Z with the Insta-Share for projecting up to a 70-inch display from the smartphone," says Mr. Goldstuck. Before long, not only display functionality gains dominance. Voice control will also grow in importance as the current ear buds evolve.

Destroyed by the smartphone

The smartphone, introduced in 2007, has an impressive record in disrupting and destroying businesses. It led to the demise of Nokia and Blackberry, both previously dominant players in the mobile phone market. "Despite ruling the market, they were nevertheless destroyed by the smartphone", Mr. Goldstuck explains. "The smartphone had a devastating impact on the sales of map books. At one stage, ten years ago, they were the best-selling books in the South African market. As Apple was preparing to launch the first touchscreen phone, the printed map was holding its own against personal navigation devices (PND) like Garmin and TomTom. Less than a decade later, the smartphone has all but wiped out both the map book, and the PND, which us now used for specialist purposes. The entry-level instant cameras are no longer being used, and film developing has vanished, along with Kodak, the company that once pioneered both."

The introduction of smartphone meant people gained access to mass media and instant messaging. Mr. Goldstuck: "Instantmessaging clearly took off from that point. The consequences are that phone calls among youngsters became fairly uncommon. Also voicemails are falling out of fashion. Teenagers don't even know what a voicemail is, let alone how to use it." According to Mr. Goldstuck messaging has been the major beneficiary of the smartphone revolution and will stay up there for a while to come. Another industry benefitting from the revolution will be the media, who are able to display their content through various channels, 24 hours a day.

But with projections all around us, connecting us to everything and everyone all the time, do we still have time for ourselves? Can we cope with so much connectivity?

Yes, says Arthur Goldstuck. "Gradually, people will get to grips with the over-use of connectivity. They will decide to which extent they will be involved with the various channels, apps and options, and narrow these down in a way that will align with their preferred lifestyles or life stages." As a result of that, Goldstuck predicts, many current apps and services will no longer exist in the future. "Twitter for instance will disappear or probably be part of something else, just as Snapchat will. Look at the Fortune500 list: It only takes 15 years for a Fortune500 listed company to be disrupted, taken over or shut down. That will happen to the social networks and instant messaging platforms as well."

Relative newcomers in high-tech, such as Artificial Intelligence (AI), Internet of Things (IoT) and Virtual Reality (VR) companies, will spawn the new Snapchats and Ubers, bringing currently unheard of brands to the Fortune 500. "AI is going to be a very big aspect of this future", Mr. Goldstuck predicts. "In ten years, the impact of AI will be where instant messaging is now: we won't be able to imagine living without it."