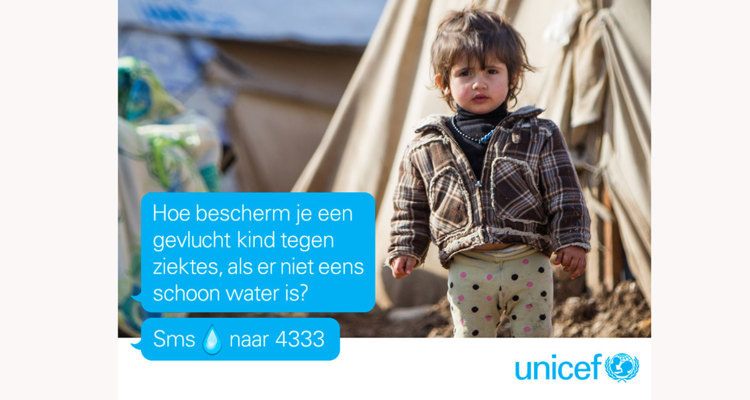 Millions of children from these countries have abandoned their homes and schools to avoid the heavy consequences coming from war and fighting. Many of the refugees, men, women and children, have been travelling thousands of miles in their search for refuge. They often face hunger, sleeplessness and lack of education and fresh water.

UNICEF makes every effort to prevent refugees, especially children, from being exposed to inhumane situations. In doing so, UNICEF needs funds to provide water, shelter, clothing, medical care and much, much more. The organisation wants people to donate money for these services through text messaging or via their website.

To enhance engagement to their mission and to give it a deeper meaning, UNICEF have also made it possible to donate funds through emoji's in sms text messages. Some 15 emoji's represent the necessities that help refugees in Europe. Every single emoji stands for things the refugees need, like water, education, books, beds and food. The picture of a sleeping emoji represents a donation for a refugee to sleep better. Texting the emoji triggers a 3 euro donation.

Embedded from the Dutch UNICEF Facebookpage

"Emoji's for donations tend be a more light-hearted way to support refugee children", UNICEF explains. "Also, using emoji's in the campaigns makes them more prominent when used in commercials and advertising. We hope this puts our campaign in the spotlight even more and persuades people to make a donation using the emoji's."

The emoji campaign required some adjustments to the sms systems, as operators don't usually process sms text messages in A2P and P2A traffic. After a donation, UNICEF sends a thumbs-up emoji back and a second text message which leads to a website of UNICEF. Both text messages require different bit sizes and have to be sent subsequently. CM Telecom updated the way the systems read and draft sms messages, so the different bit sizes seamlessly corresponded to the right text message (emoji or plain text), for both mobile-originated (MO) as mobile-terminated (MT).

Wendy Schilder, CM Telecom's market manager for Fundraising said “UNICEF's campaign is a great example of a new and engaging way of raising funds. Instead of the good old plain text message, donations can now be made by emoji's. A link in the MT text message a person receives after the donation, redirects them to a UNICEF website. That website tells the person which and how many emoji's have been used."