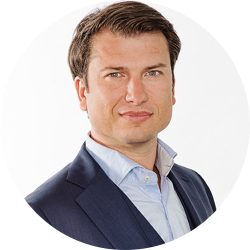 Before founding CM.com as ClubMessage in 1999 together with Mr. Gooijers, Mr. Van Glabbeek (1979) studied Technology Management at the University of Technology in Eindhoven between 1997 and 2002. In 1998, he started his career as project manager at Getronics PinkRoccade Civility. Additionally, Mr. van Glabbeek followed the Advanced Management Program of Nyenrode Business Universiteit in 2009.

In 1999, Mr. Gooijers (1979) founded and launched CM.com (at the time still ClubMessage) together with Mr. Van Glabbeek. Mr. Gooijers obtained a degree in Technology Management from the University of Technology in Eindhoven (1997-2002). He followed the Advanced Management Program of Nyenrode Business University in 2009.

In 2004, Mr De Graaf (1976) started his professional career at KPN where he held various financial and management positions of increasing seniority. In 2013, he became CFO of iBasis in the United States until the beginning of 2019. Subsequently, he returned to the Netherlands where he became Executive Vice President Group Control at Eneco Groep. Jörg holds a Master of Science in International Business, Corporate Finance & Management of the Maastricht University and is a graduate of the Advanced Management Program at Harvard Business School in Boston, MA.