Myth 1: RCS Has No Added Value… Everybody Already Has WhatsApp or WeChat

There already is a plethora of channels via which end-users are communicating. There’s WhatsApp, Facebook Messenger, Viber, WeChat. And the future probably has many other channels in store for us. One thing is certain, as an enterprise you often can’t afford to miss out on any of them if you want to reach your target audience via their preferred channel.

RCS is another addition to that list. However, RCS has some unique features that will make it relevant in the omnichannel approach. Especially in the business-to-consumer space:

1. Natively available on Android and Windows smartphones, including all recent smartphones of market leader Samsung running Android 9.0 or higher. No third-party apps are required. Sending an RCS message to a phone or network that does not support RCS will convert its content to an SMS instead.

2. Conversational messaging that goes beyond the existing 3rd party applications: 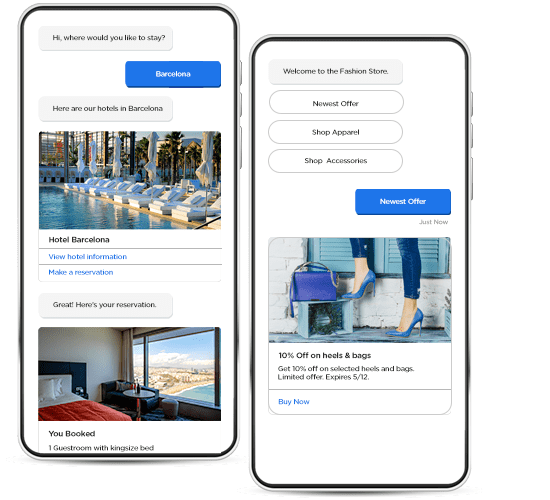 There is also one major concern to take into consideration when implementing RCS. Unlike for example WhatsApp, RCS does not provide end-to-end encryption. Depending on the content and the demands of users, this might impact the decision whether or not to go for RCS.

RCS is meant to take SMS’s spotlight, since it’s a superior messaging protocol. But that doesn’t mean the SMS technology is switched off completely straight away. Since the adoption of RCS won’t go overnight, SMS will remain a key communication channel in the coming 2 to 3 years. The gradual replacement of SMS is depending on three major factors:

But even then the question remains whether the plain, good old SMS message will be replaced completely. Because, let’s be honest, sometimes a simple text message perfectly fulfills a purpose. No rich communication is required to convey the information of for example a One Time Password or a delivery receipt.

Vendors offering RCS are free to choose a fitting pricing model. The RCS market is still in a state which is probably best defined as ‘early adoption’. Especially when it comes to the commercial roll-out of RCS globally, there is not a single successful pricing model. Yet. Currently multiple options are doing the rounds in the market, including a charge per MO or MT, data usage or message type. Integrate RCS via CM.com and you pay the exact same price per RCS message as you would pay for an SMS message.

Myth 4: Apple Is Ignoring RCS, so Why Bother?

While this is a statement that seems rational and logic at first, due to Apple’s sheer brand value and popularity, the actual facts show a different picture. In 2018, Android’s global smartphone OS market share is 84.8%. And this percentage is predicted to continue growing over the coming years. So, let’s rephrase the statement: Apple is ignoring RCS, but who cares?

Maybe Apple will embrace RCS in the future, maybe not. The cool thing is that no matter which communication channel you pick, CM.com helps you to cover the entire smartphone market with just a few easy-to-integrate APIs.

Myth 5: The Adoption Rate of Operators Is Sluggish at Best, so It Will Never Fly

As with any new technology, RCS needs time to be adopted by the market. Operators play an essential role. Without global operators and incumbents embracing RCS -meaning technically prepping their network for RCS- RCS indeed may never take off. However, actual data shows promising foresight:

With countries such as Mexico and Japan already having a 100% RCS coverage, and the US rapidly adopting the technology. It shows that it’s just a matter of time before RCS has global, waterproof coverage.

While there are still a few things that need to be ironed out during the process, it is clear that RCS will change the conversational messaging landscape in a positive way.

Do you want to know more about what RCS can do for your business?

Do you want to know more about what RCS can do for your business?

Stijn Coppieters is a senior product manager at CM.com, and your go to guy for anything related to Voice, SIP Trunking and CPaaS. He also likes to make music and play games.