Customer Story - King of the Court• 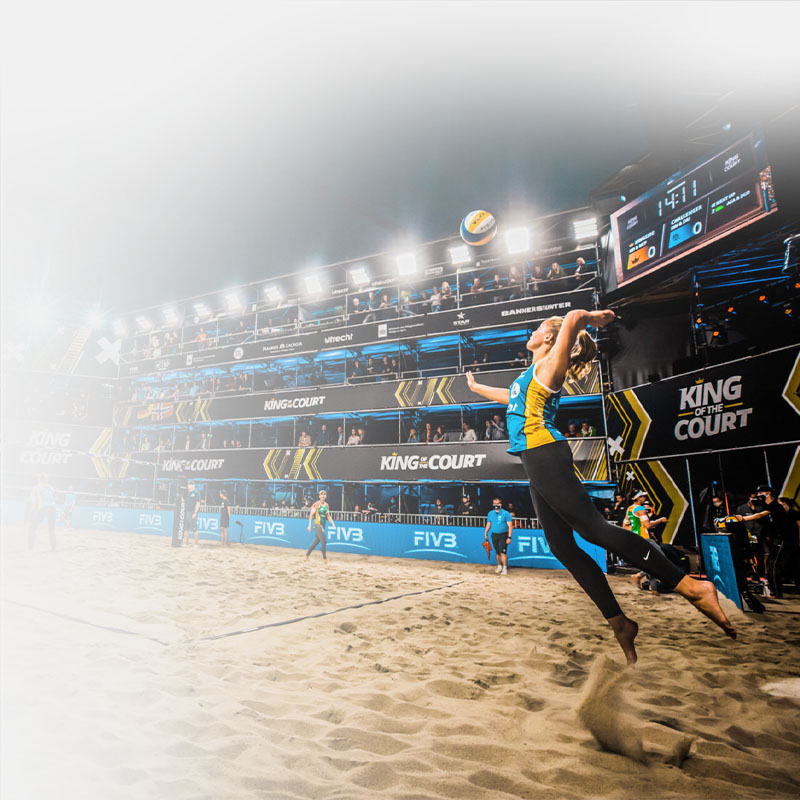 About CM.com Customer Stories King of the Court

From Hawaii to Hamburg, Sportworx (the Utrecht-based company behind the King of the Court concept) organizes beach volleyball tournaments globally. Yet, they take an approach that’s different from what you might expect. Their version of the game puts the audience experience front and center. They’ve modified the rules to emphasize speed and dynamics, transforming the game into an entertaining spectacle for both players and audiences alike. After a successful debut in 2017, the event turned out to be a hit and soon led to a series of games played all over the world. And then the COVID pandemic broke out.

To keep organizing King of the Court events, even in the first year of the pandemic, Sportworx built a COVID-safe stadium in Utrecht. In August 2021, they partnered with CM.com to host another event there. Instead of buying individual tickets for admission, fans bought a ticket to a skybox. This way, groups of friends could enjoy the event while also adhering to COVID-safety rules. The idea was to keep fans inside their skybox as much as possible to avoid contact with others. Organizing a COVID-safe event like this presented many complex challenges. That’s why King of the Court chose to partner with CM.com.

Inside the stadium, there was space for different groups of fans: a VIP terrace, company skyboxes, and seats for “regular” beach volleyball fans. To make sure everything went smoothly, the organizers decided to use seated ticketing. Margriet Verweij, Account Director at Sportworx, explains: “We were looking for a partner that could develop a custom-built shop for us with different kinds of tickets, all in our branded style. CM.com software was a perfect solution for that.” It was also important to collect fan data to be able to communicate optimally.

That data was collected and segmented in the CM.com Customer Data Platform, enabling you to compile offline and online customer data. King of the Court also used Mobile Marketing Cloud from CM.com to communicate with fans before, during, and after the event. That enabled them to use the data they’d collected to inform people, for example, about practical matters like parking and COVID safety, but also to stir up excitement about the event.

“The software from CM.com let us warm up the crowd nicely during the week before the event. We shared videos about the event, for example, showing some players inviting people to the games and talking about how much they were looking forward to it. People feel personally engaged because they receive these messages on their smartphones,” says Margriet. “And for us as an organization, it’s really valuable to handle the ticketing and the communication with fans using a single platform. Everything worked very well, and it was flexible to use. We can even use it to send out our newsletters or ask attendees by email to fill out a mini-survey to give us their suggestions for improvement.”

Sophie van Gestel, the project manager, says she was very impressed with the Cash Register Software. To minimize personal contact, audience members use a QR code to order and instantly pay for their food and drinks without leaving their skybox. The order is then delivered to skybox. “We wanted for people to stay in their skybox as much as possible. That's why we used Mobile Order. And since the orders were delivered right to them, everyone felt like a VIP. Besides that, when people have to go and get their food and drinks at a separate bar and wait in line for a long time, it raises catering costs.”

VIPs were also in attendance and were treated to free food and drinks. This presented another challenge that the CM.com software solved. For each skybox, the organizer could specify whether a payment was required or not. Each box also had a unique QR code, so the bar staff knew where to bring the orders. As a result, the fans didn’t have to miss a minute of the games.

Margriet sees even more advantages: “Besides making everything easy and accessible for the attendees, the software lets you keep track of your sales, for example. You can also use it to monitor inventory. For the caterer, it’s extremely useful to have a real-time overview of how much stock they have so that they can use that to their advantage. The software can also be used to send out live push notifications. So, for example, you can encourage people to place an order at a certain time to receive a free signed t-shirt or free refreshments.”

For Margriet, it’s impossible to imagine the sports event world without mobile applications. “From the one-time attendee to the die-hard fan, everyone goes to sports events for their reasons. Mobile applications like the ones provided by CM.com help us offer a custom-made experience for everyone.” She expects that mobile communication will only continue to grow. “I can see lots of different possibilities, also during the event. For example, sharing fun facts about the players exactly when they are about to make a play. Things like that help you engage with your audience and build a community.”

A Partner for the Total Experience

CM.com not only supplied smart technology for the organization, but we were also the experience partner during the event. That was a good fit, says Margriet. “Experiencing an event is a lot more than just being there and having a beer in the stands. It’s also about being in touch with the fans, before and after the event, and keeping them informed in the nicest way possible about everything King of the Court is doing. That’s how we build ties with our target group, both offline and online. The latter is CM.com’s territory, making them a valuable experience partner.”

Margriet and Sophie say that they also enjoyed working with CM.com as partners. Following the first collaboration, which took place during the Olympic Qualification Tournament in June, CM.com received a positive evaluation. At that point, it was clear to the organization and CM.com that they were ready to work together to put on a fantastic event two months later. “It was a real team effort,” both of them agree.

To show you how to use our products to create a top-notch fan experience before, during, and after a visit, we've created an infographic. Download it for free and discover it yourself!